Rocket Recordings: Hills to play rare shows: The great HILLS have announced a rare show in Denmark on 13 December and in Sweden the day after. We are hoping to get the band over t...
Upplagd av Hills kl. 07:15 1 kommentar:

It´s been a while and we are looking forward to this very much. Varmt välkomna!
Upplagd av Hills kl. 14:56 2 kommentarer: 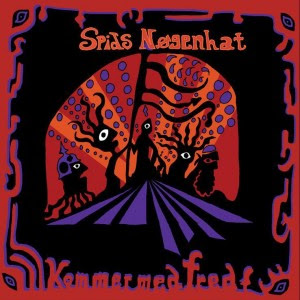 October 21st Spids Nøgenhat will release their second studio album entitled “Kommer Med Fred (roughly translated to “We Come in Peace”). Spids Nøgenhat have their own take on how psychedelic rock should sound and are deeply rooted in Danish acid rock of the early 70’s that somehow had a special sound compared to what was happening in the rest of the world at the time. The lyrics are in Danish and the album contains 7 original songs and a cover version of Den Gennemsigtige Mand by Furekåben.
Spids Nøgenhat (which translates to the magic mushroom Liberty Cap) was originally formed as a side-project in 1996 by Henrik “Hobitten” Klitstrøm, Morten “Aron” Larsen and Uffe “Aramis” Lorenzen (Lorenzo Woodrose) who at the time all were part of the Copenhagen based band On Trial. A band that since has led to numerous offshoots like Baby Woodrose, Ghost Rocket, Dragontears, Black Beacon Orchestra, Aron and lately Blind Owl & Good Spirits. 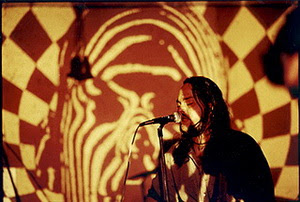 The origins to Spids Nøgenhat started a few years earlier though when Lorenzo and Aron spend some time together playing acoustic guitars in a very basic folk format. Lorenzo was at the time already full on recording his own 4-track folkpsych project called Pandemonica which was a big inspiration for all and led to loose and stoned late night jamming in the rehearsal room. Aron and Lorenzo also played acoustic folk in the streets of Copenhagen trying (very unsuccessfully) to expose the common public to Roky Erickson, Love and Spirit.
By 1996 Spids Nøgenhat were a trio including Hobbitten and started to explore the psychedelic folk format even more. Three guitars, a singer, some natural inspiration and lots of echo on top was the trademark sound of the band at the time. In 1997 the band got a deal to play every Friday and Saturday for a month at Cafe Rust in Copenhagen. A difficult place to play folkrock. Imagine a room full of party people trying to score that had very little interest in listening to three acidheads stoned out of their mind. So they never got back there again. But they played 6 gigs more in Copenhagen and Nykøbing Falster and one show in Germany 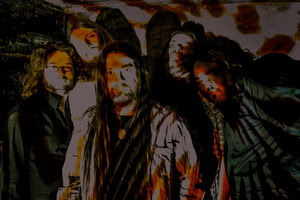 Inspired by Danish acid rock bands from the early 70s like Alrune Rod, Røde Mor and De Fortabte Spillemænd they recorded their debut album “En Mærkelig Kop Te” (A Strange Cup of Tea) at the Mad Scientist Music Lab in the Northwest part of Copenhagen in 2000. Nick Hasselby engineered the recordings and Lorenzo played organ, bass and drums to complete what was now a fully electric band.”En Mærkelig Kop Te” was released in 2001 on Orpheus Records and did not receive much attention at the time but since then it has grown into a serious cult album with many reprints on vinyl. After the first album and the Alrune Rod 7″ released on Lorenzos Pan Records the band disbanded. Lorenzo got busy with Baby Woodrose, Arons started his own solo carreer and Hobbiten was still in On Trial.
The band resurrected in 2009 after public demand now including Anders “Moody Guru” Skjødt and Anders “Fuzz Daddy” Grøn, who both were in the original line-up of Baby Woodrose along with Lorenzo, and Sebastian “Zeppo” Bülow who contributed with the great visuals that always give a special vibe to the Spids Nøgenhat shows. A legendary concert at Roskilde Festival in 2011 later turned into the live album “De Sidste Her På Jorden” from 2012.
Bad Afro Records will release the long awaited follow up album to “En Mærkelig Kop Te” October 21st 2013. First print of the LP is limited to a 1000 copies on black vinyl. A limited edition cassette version of a 100 copies will only be available at their shows.
The first single “Lolland Falster” will be online September 9th.
Photo credits: 1 = Nick Hasselby, 2 = Magnus Cederlund
Upplagd av Hills kl. 09:19 Inga kommentarer:

Looks like we like this one so much that both Allan and Andee, unbeknownst to one another, each wrote reviews of it for this list, whoops! But they're almost the same review, which just goes to show that what they say about Hills Live must be true. For an exercise in comparative literature, here's both reviews, Allan's first:

This is one of the first records we've managed to get in on the new Cardinal Fuzz label out of England. Frustratingly, we missed out on some stuff they did earlier by the likes of The Heads and Hookworms, but at least we now have THIS, a live album from Swedish hypno-rock jammers Hills, whose previous two albums we're totally loved (we reviewed Master Sleeps on list #391). Their spacey, krautrock channelling grooves hit the spot like those of that other 'Hills' band, White Hills, and we recommend 'em to fans of Wooden Shjips too, big time, for another positive contemporary comparison.

This record finds Hills in their element, the title simply says it all: Live. Stretching out improvisationally over two sides of vinyl, this contains two roughly 15-minute long tracks, "Kristallen Den Fina" and "Frigorande Musik", the latter recorded exclusively for this release. Both are just want we want - massive, mantric, sometimes flutey rhythmic churn with underlying Eastern drone vibes...

What's especially obvious from the music here, and dunno why we didn't mention it before, is how much Hills are serious acolytes of their aQ-beloved countrymen Trad, Gras Och Stenar, sounding a heck of a lot like them in their various incarnations of decades past (TGOS, Harvester, International Harvester, Parson Sound). If you love those groups you'll totally dig this!!

And then Andee's very similar take on this lp:

We've been dying to carry records on UK label Cardinal Fuzz, but with no US distribution, we had no luck at all, UNTIL NOW! Elsewhere on this week's list you'll find a double lp from Swedish heavy space psych combo the Janitors, and then there's this, a long out of print cassette from hippie psych space rockers Hills, reissued on vinyl with a whole second track/side exclusive to this release! Recorded live, the A side (and the new B side for that matter) find these guys channeling their Swedish forefathers (Parson Sound, Trad Gras Och Stenar, etc.), and we're ALWAYS skeptical when a band is compared to a group like Parson Sound, but these guys totally pull it off, and if we didn't now any better, we might have even bought that this was some unearthed live tape from back in the day. Tranced out psychedelic krautrock style instrumental minimalism woven from motorik drumming, buzzing distorted guitars, looped sounding psych guitar riffage, everything fuzzy and hazy and druggy, laced with cool wah guitar leads, and rife with subtle shifts and sonic variations, but ultimately, the band locked tight into a single groove, playing on endlessly, utterly mesmeric space-kraut that sounds like classic minimalism (Reich, Riley, Young) recast as heavy psychedelic hippie folk hypno-psych. The flipside is even cooler, slower, dirgier, murkier, just as tranced out and hypnotic, but all woozy and washed out, all churning low end, and killer drumming, loose and free, but forever bound up in this droney druggy psych-murk mega-jam, that sort of epic psychedelia that could and SHOULD go on forever...

Obviously WAY recommended! LIMITED TO JUST 200 COPIES for the USA, vinyl only, get 'em while you can. With this as a teaser, we're really looking forward to Hills upcoming album on Rocket, as well!
Upplagd av Hills kl. 13:05 Inga kommentarer: 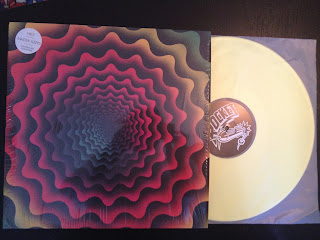 Leeds label Cardinal Fuzz have established themselves as a force to be reckoned with very quickly, putting out sought-after records by the likes of The Heads, Hookworms, The Cosmic Dead and even a forthcoming live LP from those exciting newcomers Goat in the pipeline! It’s fair to say that if something’s coming out on this label it’s worth turning a bong-contorted ear towards if you’re into all things hypnotic and fuzzy.
This one here is by Gothenburg’s Hills ahead of a forthcoming album on the mighty Rocket Recordings, with two side-long jams of hypnotic repetition, which rolls along in a gentle head-nodding fashion with tasty wah guitar, metronomic drums and boomily cycling basslines. On the first side there’s ‘Frigorande Musik’ where they groove patiently on a lovely psychedelic riff for about 10 minutes, then take it down to a weird cosmic organ drone with little bits melodic guitar details poking through (and is that a flute?), and then kick back into the groove a bit harder and more determined to close.
Over on the other side is ‘Kristallen Den Fina’, which is a little harder and doomier but still uses the same elements of hypnotic repetitive grooves and fuzzy guitars, kind of like a less nightmarish Bong. Li’l Biz has mentioned that this side bears a strong reference toKogumaza and she’s right there. Both sides of this contain dope jams, I’d advise psych collectors to grab one while it’s available!
Upplagd av Hills kl. 03:15 Inga kommentarer:

The new Hills LP is up for pre-order from Cardinal Fuzz now! Those who act fast will get the limited splatter version vinyl ( 250 pcs ). First come first served! 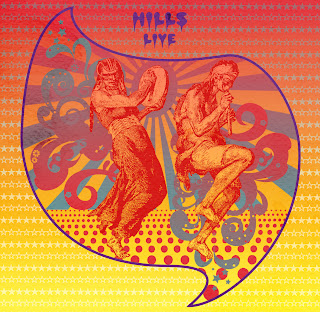 The upcoming Hills release on wonderful Cardinal Fuzz Records has had a slight change in the tracklist. It will feature a totally new unreleased 15 minute Hills track called Frigörande Musik for one of the sides instead of one of the live recordings.

The release will now feature the songs

We are very happy about this. It looks like the vinyl is going to be a limited run of 350 cps on splatter vinyl so be sure to lay your hands on one of them. Release is scheduled to sometime in June.

We will update surrounding our other releases as we progress..

Rocket Recordings are celebrating 15 years active this year and asked us if we wanted to contribute to their special 15 year anniversary compilation. We of course said yes. The new track is called National Drone and will be an exclusive track for this RR LP compilation that will also feature new songs by bands like : Goat, Gnod, Anthropropph and others.

We are also extremely glad to announce that Rocket Recordings will release the new Hills LP during 2013 as well.

We´ll provide more info about both releases as we have it.

Hills cancel Roadburn 2013 but return for 2014 instead

Due to personal reasons we have been forced to cancel the gig at Roadburn Festival in April. The upside to things is that we will play Roadburn 2014 instead :)

Yes, the brilliant UK based Cardinal Fuzz records will release a live recording of Hills. It was recorded live in gothenburg in 2011. It features 2 songs previously only released on a cassette that quickly sold out. So everyone that missed out on the cassette will have a new chance to get hold of these tunes now.
On a limited vinyl with new artwork. It´s gonna rip!

Hills are also to release more stuff during 2013. A new full length LP is planned among other stuff.

We will get back with more info on this and the other releases soon.

Hills
Hills are from Gothenburg/ Sweden and was formed back in 2007. Hills formed to make music that focuses on the groove/sounds and rhythm instead of classical songwriting structures. To create a meditative space, without rules, heavily dependent on improvisation. To create a feeling but not necessarily to explain it through words. Influenced by everything from the early experimentation of John Coltrane via the repetitiveness of Velvet Underground, Krautrock / Psych in general and the grimness of early black/ death metal bands and punk. Hills try to keep it honest, analog and raw the very best way they can.